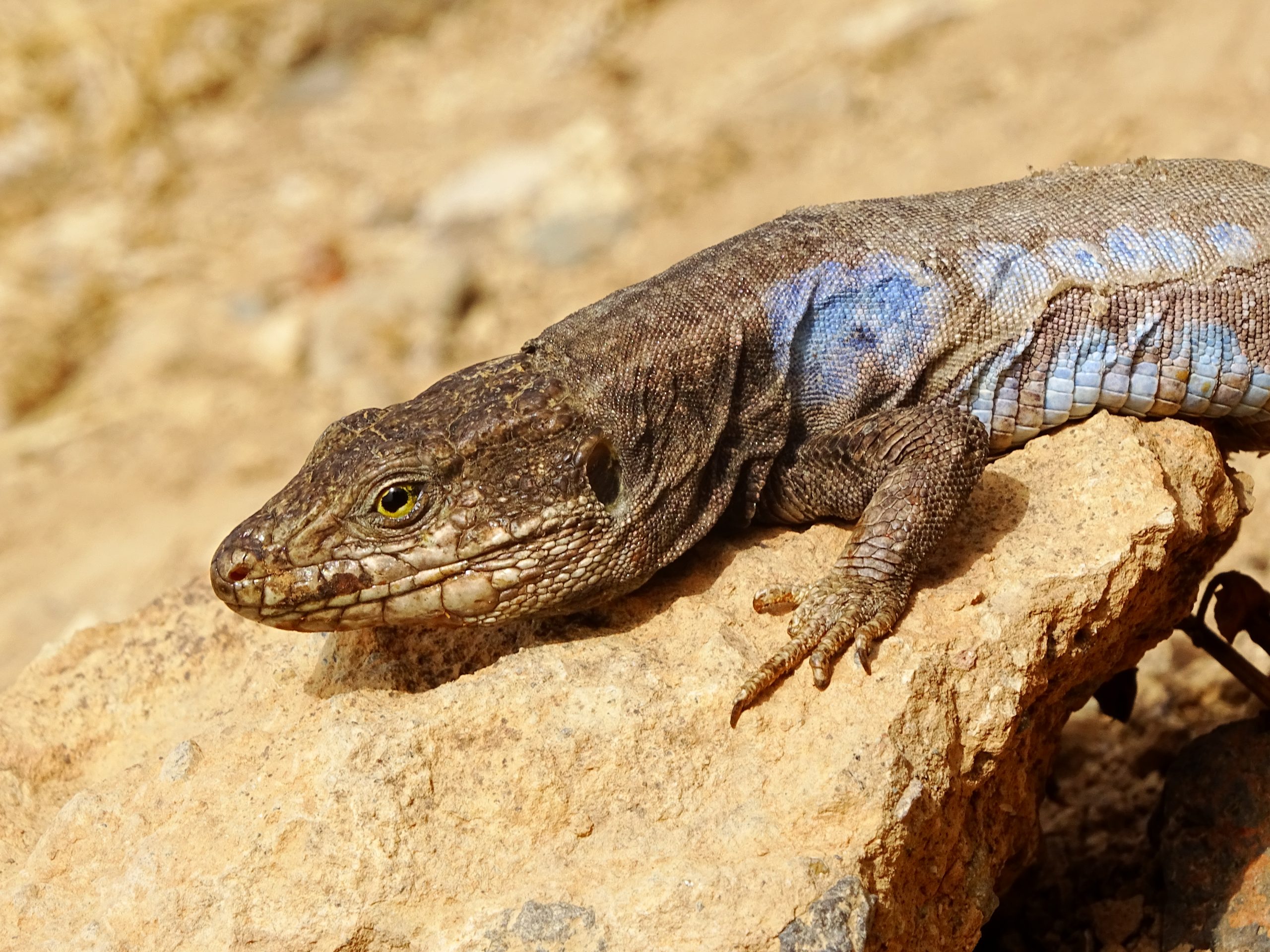 Tenerife lizard live on Tenerife island and belong to lacertid lizards that occupy Europe, parts of Asia and Africa. They appear to have originated in north-west Africa and reached the eastern islands first, spreading westwards across the archipelago. They are often very dark, black, greyish or brownish with bright blue spots and patches of different sizes on the flanks. Some lizards can have also yellow spots and females are often striped. Young ones are often very different in colouration from adults with stripes on the back. They have a voice and often squeak. Tenerife lizards can be found across the whole island of Tenerife, from the coastline and up to the cone of Teide on over 3,700 m a.s.l. Their specific habitat is rocky substrate or sandy soil, but vegetation changes across the island, from space vegetation in the semi-desert like coastlines and high-altitude volcanic landscape, to Mediterranean and subtropical ecosystems in the mid altitudes and pine cloud forest and laurel forest ecosystems. In lowlands they are active all year round and they exhibit a very high preferred body temperature compared to other lacertids (approx. 31-36⁰C) Inactivity is connected with either too cold or too hot and dry conditions with less food available when they retreat to burrows and reduce their body temperature and metabolism to avoid stress. Tenerife lizards are food opportunists, where insects are abundant, they are predominately insectivorous and in other places they eat plants, vegetables and fruits. They can be viewed as pests in fields where they can reach high abundances and if crops are not protected, owners may incur damages. 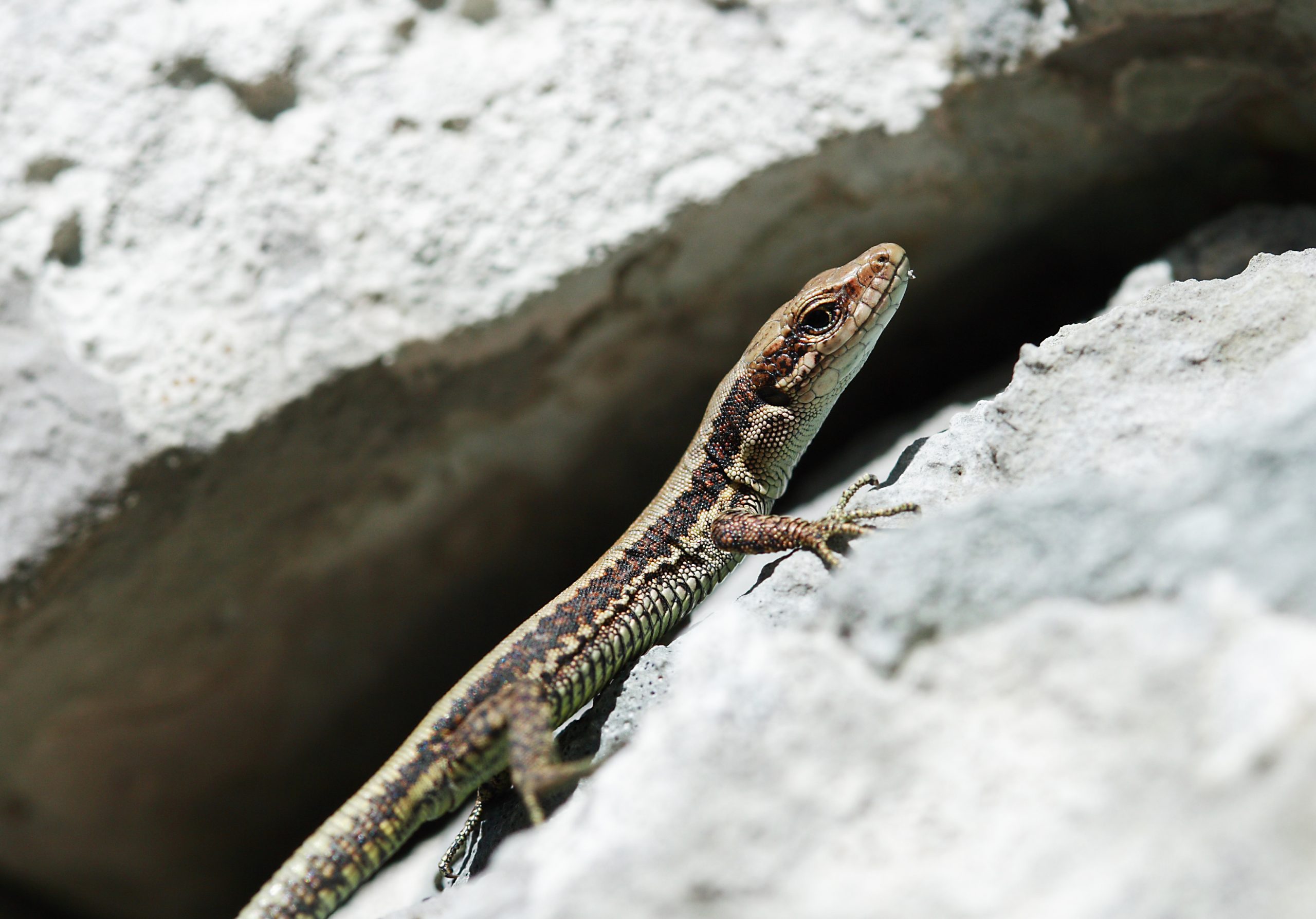 Horvath’s Rock lizards is distributed in four countries: Italy, Austria, Slovenia and Croatia, where it occupies eastern Alps, northern-west Dinaric Mountains, showing an increase in abundance with altitude. They have brown or grey colouration of the back with two dark brown stripes on the sides. Stripes can have a serrated border and some individuals can have irregular black spotting on the back. They inhabit rocky substrates with sparse vegetation, such as mountain habitats, screes, walls, boulders and mostly avoiding urbanized areas. Their bodies are flattened that allows them effective thermoregulation in colder mountain habitats. They also have an extremely flattened head that allows them to enter narrow rocky crevices for shelters and seeking invertebrate prey. With long hind legs and fingers and sharp curved nails they can climb well on vertical or even overhanging walls. Horvath’s Rock lizards have a fine-tuned behavioural and physiological adaptations to harsh mountainous environments with long snowfall periods, high seasonal differences between dry and relatively cold summers and wet and cold winters. Multiple ecophysiological studies have shown that they are precise thermoregulators with narrow range of preferred body temperatures, they lose relatively low amount of water through respiratory-cutaneous route, and exhibit high metabolic activity potential that allows them to have high rate of metabolism over a short activity period. They are insectivorous. Phylogeographic analyses identified two main groups of Horvath’s Rock lizard, one in the north and one in the south. The gap of currently unsuitable habitat between the two groups was likely maintained during the previous interglacials and could have played a key role in the evolution of this geographically-restricted species.